October 5, 2021: PARIS (AP) By SYLVIE CORBET — Victims of abuse within France’s Catholic Church welcomed a historic turning point on October 5, 2021, after a new report estimated that 330,000 children in France were sexually abused over the past 70 years, providing the country’s first accounting of the worldwide phenomenon.

Report documents 3,000 pedophiles working within French Catholic Church over the last 70 years.
The independent commission examining sex abuse within the Roman Catholic Church in France believes of the 3,000 child abusers, two-thirds of them were priests — wrongdoing that Catholic authorities […]

ECA Global provides seasonal updates covering major news and developments on child protection and advocacy from around the world. Please sign up to get our ECA Global Newsletter.

Ending Clergy Abuse (ECA) is a worldwide organization of human rights’ activists and survivors from over 21 countries and 5 continents who focus on children’s and victims’ rights to compel the Church to end clerical abuse, especially child sexual abuse, in order to protect children and to seek effective justice for victims.
ECA demands the end of the Church’s structural mechanism that allows abuse.

Ending Clergy Abuse (ECA) is a new effort that began in August, 2017, in Washington DC from an idea of Barbara Blaine. She asked, “Can we put together a team of clergy abuse activists from all parts of the world to confront the pope and the Vatican?” “Can we show our unity of purpose and no longer be isolated voices?” A group of activists answered positively and Barbara called it The Accountability Project or TAP. Barbara was planning a TAP meeting in Poland for November, 2017, when she died suddenly in September… 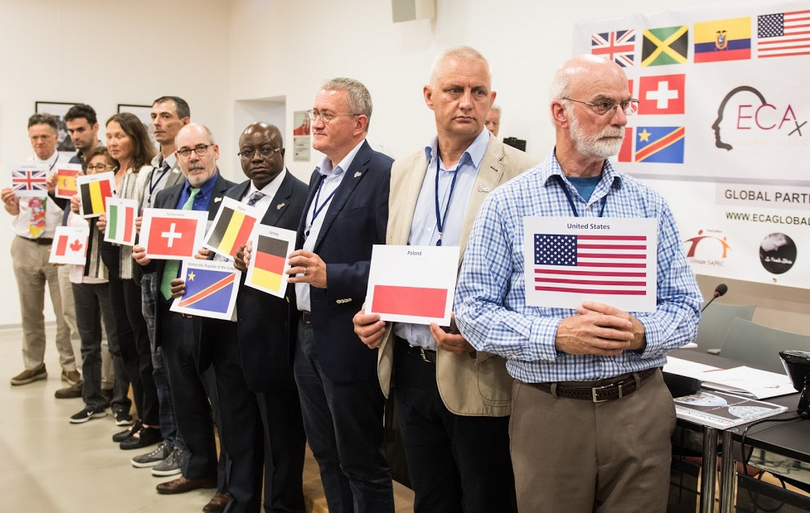 HOW YOU CAN HELP

ECA, Ending Clergy Abuse is a new initiative and it is still in formation. Word is getting out and our base is growing. Even within this short amount of time we see that our impact is tangible. We envision a global network of activists united in the common cause of ending clergy abuse. With your support we can do our part to make the world safer for children and redress the wrongs already committed.

ECA GLOBAL NEWS. FALL 2021. HEAD OF FRENCH BISHOPS SAYS ABUSE REPORT IS DEVASTATING OCTOBER 1, 2021: FRANCE. For 3 years, the French commission, CIASE, investigated sexual abuse committed in the church. This commission compiled a 2,000+ page report and the report has not [...]

ECA, SNAP AND NATE’S MISSION ENDORSE PRESIDENTIAL PICK FOR US AMBASSADOR TO THE VATICAN

October 2, 2021. WASHINGTON, D.C. Peter Isely and Tim Law, both representing ECA, were in Washington DC at the Cathedral of St. Michael's on October 5th for a press event. This is President Biden's church in DC.  We worked [...]

THE TOTYA PLATFORM IN UGANDA. Baby Sharon's story (not her real names); The now 2 year old Sharon is the youngest client that we have, she was defiled by her mother’ boyfriend. Sharon mother Josephine separated with her husband in [...]

ECA GLOBAL NEWS SPRING 2021 While governments and health care workers everywhere are working to get the global pandemic under control, ECA is not remaining silent but doing its part to hold accountable those who have violated the rights of [...]

Webinar On Update on Clergy Abuse and Justice in Italy

LINK TO ECA'S JANUARY NEWSLETTER. https://archive.aweber.com/awlist4986531/FZ2ex     ECA GLOBAL NEWS JANUARY 2021 THE "NEW NORMAL" Another year is ahead of us and 2021 has certainly brought with it several of the uncertainties and troubling features that lingered throughout 2020 as well as [...]

ECA produces a monthly ECA Global Newsletter, covering major news and developments on child protection and advocacy from around the world. Please sign up to get our newsletter.